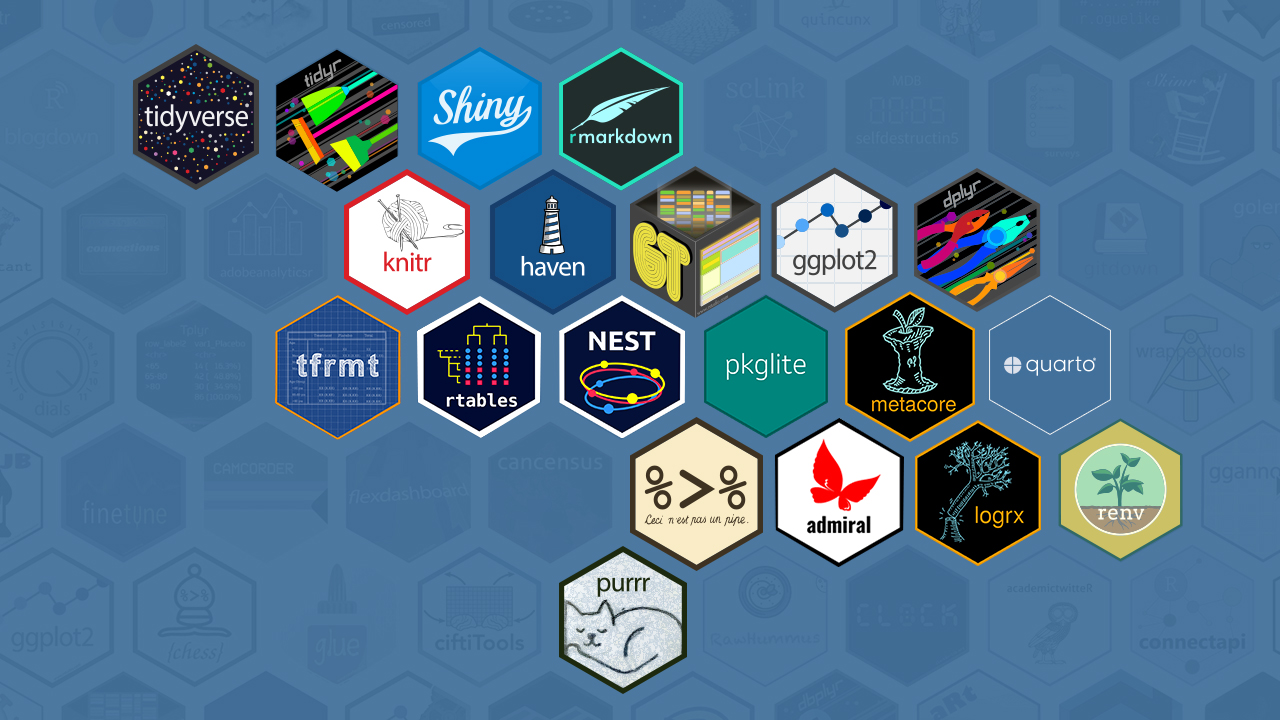 Pharmaceutical companies spend significant money and resources trying to bring therapeutics to market faster. Regulatory submissions often entail similar and repetitive activities, and innovations in this area mean tremendous gains in efficiency and quality. Around 2009, the industry started to change as open source provided an easier, more collaborative, and more efficient way to tackle these tasks.

In August 2018, pharmaceutical companies gathered at Harvard University to discuss R and open-source tooling for drug development at R in Pharma. For years, industry leaders have been scaling their clinical trial workflows with tools like Shiny, Quarto/R Markdown, and the tidyverse. These core packages improve and automate data management and reporting, and they were the main focus of the R in Pharma conference from 2018-2020.

On top of these core tools, organizations create custom functions and packages that aid in their unique requirements. One of the most popular questions at 2018 R in Pharma was, “Is the package code available or on CRAN?”. While cross-enterprise, open-source collaboration is a common theme in pharma (in projects such as Bioconductor, R in Pharma, R Validation Hub, and Cross Pharma High Performance Computing), having availability to clinical workflow packages and code was often locked behind company firewalls.

This all changed at the 2021 R in Pharma conference during Ben Straub’s (GSK) and Eli Miller’s (Atorus) presentation called “Closing the Gap: Creating an End to End R Package Toolkit for the Clinical Reporting Pipeline.” At the end of the talk, Eli welcomed the community to the pharmaverse. Borrowing ideology from the tidyverse, the pharmaverse is a new group of packages developed by various pharmaceutical companies to support open-source clinical workflows. 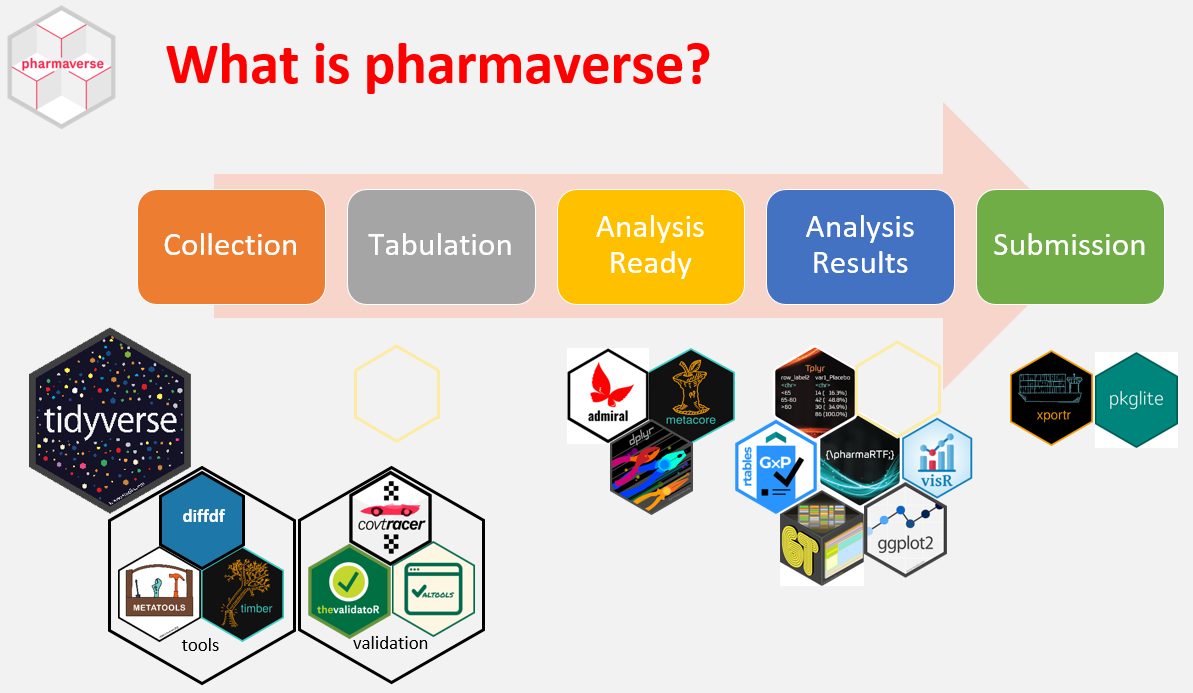 The pharmaverse demonstrates the recognition of the best programming language (R) and the best model (open source) for the creation and adoption of industry-standard tools in pharma. Representatives across GSK, Atorus, Roche, and Janssen curate an opinionated stack of open-source R packages for end-to-end clinical reporting.

The pharmaverse started as a shared vision of Michael Rimler (GSK), Ross Farrugia (Roche), Mike Stackhouse (Atorus), and Sumesh Kalappurakal (Janssen) to provide the industry with a “pharma stack of open source R packages to enable clinical reporting (from CRF to eSubmission)”. For instance, one of the most critical standards for clinical trial submission is the Analysis Data Model (ADaM). ADaM standards outline how to create analysis datasets and associated metadata. This allows a statistical programmer to generate figures, listings, and tables while ensuring traceability. Reviewers can assess and approve a submission more quickly. To address the strict standards of the Federal Drug Administration, Roche and GSK joined forces to create the ADaM in R Asset Library package, admiral. Admiral provides a toolbox of reusable functions and utilities with dplyr-like syntax to prep ADaM datasets. It can be used alongside other tidyverse packages so that programmers can build ADaMs according to their varying analysis needs.

Other packages include NEST, a set of R packages for streamlining the generation of interactive analyses, and metacore, for using metadata within an R session. JnJ, Merck, and other pharmaceutical companies joined the effort in 2020 and 2021 to contribute code publicly to CRAN for packages they use internally, such as Merck’s pkglite and Roche’s rtables.

While many of these packages began with a small set of developers, the pharmaverse is open to contributions. Over 100 developers have contributed code to the various packages. A package’s admission into the pharmaverse is a stamp of approval from council representatives to guide others in their clinical reporting workflows. The open-source spirit ensures a fair and representative voice is given across the industry, enabling:

The pharmaverse is an incredible demonstration of the growth and evolution of open source in clinical trials. We at Posit believe the future of pharma is open source, and we also love to contribute to these efforts. Rich Iannone, a developer at Posit, is an active contributor to the R Consortium’s R Tables for Regulatory Submission Working Group and maintains the gt package. With gt, clinical programmers can prepare and customize tables using R. Users write code once and render it to RTF, HTML, LaTeX, and other outputs. The package has been in continuous development at Posit for over three years, and we incorporate features tailored to the pharma industry. 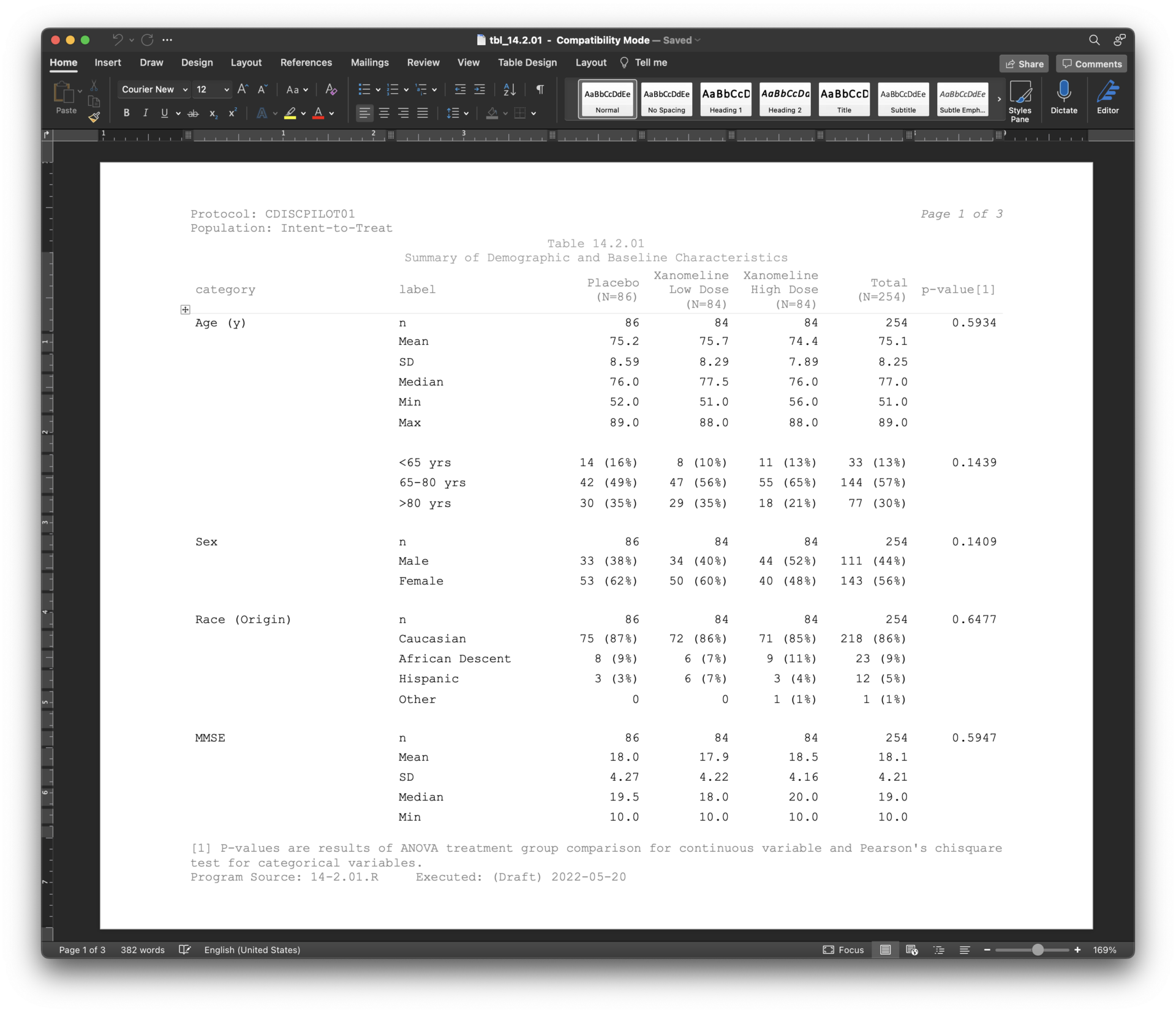 More than just providing technical functionality, open source offers innumerable opportunities for collaboration between the best minds in the field. These efforts to join forces together across the industry are historical. “When you’re thinking of those medicines, when you’re thinking of those chemistries, and how we are innovating in therapeutics, that is where a lot of…desire is to innovate,” says Afshin Mashadi-Hossein, Sr Principal Scientist at Bristol Myers Squibb. “So if this helps the industry, they put it out there.” Thanks to the nature of open source, pharmaceutical companies contribute code and share algorithms to increase transparency, improve quality, and drive innovation that saves patients’ lives.

We believe this work is just beginning, and we look forward to what’s to come.

There were many talks and workshops on the pharmaverse at the 2022 R in Pharma conference. You can see many on YouTube. Highlights include:

We want to help you go further with open-source data science. By subscribing, you'll get alerted whenever we publish something new.